"In an ample demonstration of the fact that love and compassion are necessities, not luxuries, Mr. Rao has been making all out efforts to reach out to the poor and the needy in his small way. 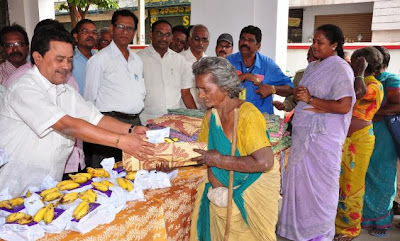 "After office hours, Mr. Rao made good use of his free time on Friday evening by going around the areas of Old Government General Hospital, Old Bus Stand, Railway Station, Eluru Locks and cinema halls and pavements that attract a large number of the homeless.

“Of the 80 needy women identified, at least 15 of them were pregnant,” he said adding that he gave them coupons and asked them to gather at the post office the next morning.

"On Saturday morning, people in the vicinity of the Gandhinagar Post Office witnessed distribution of bed sheets, bread and fruits to street urchins and the homeless by officials of the Department of Posts.

"Contrary to the perception that such programmes are sponsored by a government department or an NGO, this distribution was sponsored by the postman of the Gandhinagar Post Office R. Ramachandra Rao.

Continues at The Hindu