"Postmen employed on cycling work should be strongly recommended to wear woollen vests and drawers, and opportunity should, when possible, be afforded to men who get wet to change their clothes..."
Cycling Duties - Circular to Surveyors, March 1909

Line of postmen with their cycles, 1920s 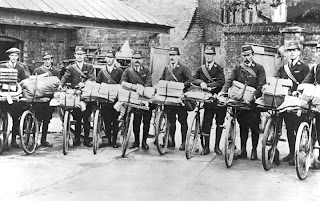 "Pedal cycles have been used since the 1880s to increase the speed of mail deliveries and the distances the delivery postman and postwoman may travel. The photograph below shows a dynamic group of cycling postmen ready to start their round in the early 1920s.

Before 1880, Post Office trials with early bicycles failed, mainly because it was difficult to find men fit enough to ride them! In 1880, two tricycle posts were used experimentally in Coventry. Their rider-owners had a weekly allowance of five shillings (25p) towards their purchase and maintenance.

In the late 19th century, experiments took place with two, three and even five-wheeled cycles. In 1882, at Horsham in Sussex, there was a local trial of the centre-cycle (or 'pentacycle', with five wheels) for carrying mail. The centre-cycle was also known as the 'Hen and Chicks' as the four small wheels around the large centre wheel was similar to a mother hen with her brood.

By 1895 there were 67 regular cycle posts set up throughout the country. In 1909 there were 5000 postmen on bicycles, carrier tricycles and bicycles with trailing carts.

A standard design bicycle was introduced nationwide in 1929. By 1933 some 20,000 were in use. This basic design remained in use until 1992, although some changes were introduced such as models for women and reinforced versions for taller, heavier-built postmen.

Today, Royal Mail has about 37,000 delivery bicycles, including new designs developed for the 21st century - the Mailstar and the Millennium." 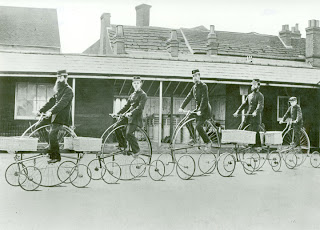 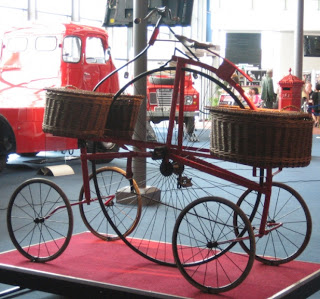 "This is a replica of a five-wheeled cycle (pentacycle or centre-cycle) made in 1930. The Pentacycle was originally invented and patented by Edward Burstow, an architect, from Horsham, Sussex in 1882.

Postal officials at Horsham tried out these cycles for both postal and telegraph delivery work. Although the centre-cycle did not prove popular elsewhere, the Horsham postal workers wrote a letter of appreciation to Mr Burstow, praising the pentacycle. 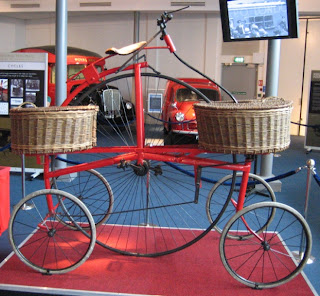 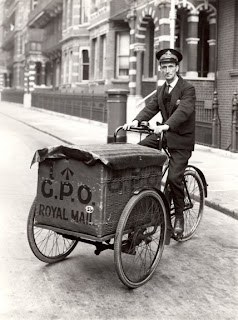 "This is an example of a delivery bicycle produced to the standard specifications established by the Post Office in 1929. With little variation it remained in production until 1992.

This cycle has a Double Top Tube frame, which is designed to carry a taller rider. This Double Top Tube was one of three frame designs for Post Office Standard cycles. The others were Gentlemen's and Ladies'.
The standard bicycle weighed up to 23kg and had to last four years before replacement. 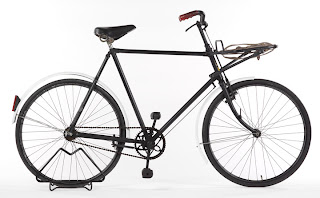 "This bicycle was probably used by a Post Office manager or inspector. We can tell this because it is black. The usual delivery cycles were always red. It was produced by Tyseley in 1929, to the standard Post Office design.

Inspectors' bicycles like this were used until the mid-1980s when they were phased out and replaced by motor vehicles. 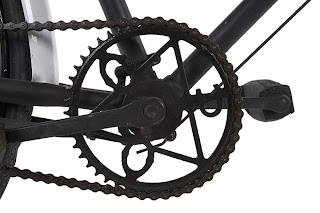 "The initials GPO (General Post Office) can be seen worked into the design of the chain wheel – a feature that started in the early-1930s. 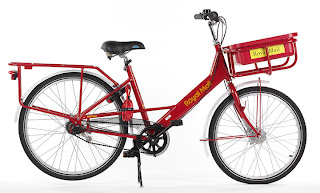 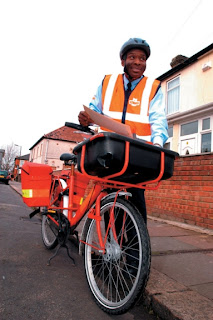 "This cycle is the last of this model produced by Pashley Ltd. It was one of the new delivery bicycles for the 21st century, introduced by Royal Mail in 2001.It includes many of the technical advances already put into commercial production by cycle manufacturers. It features a unisex, step-through frame so that it can be used by both postmen and postwomen. It also has lever-operated cable hub brakes. The metal carrier at the front can carry loads up to 24kg. This would have a plastic tray in it to hold the mail bag. It also has a twist action control for the five-speed gears.