More bad news for the UK greeting card industry... We sourced our Classic Cards from Museums and Galleries. 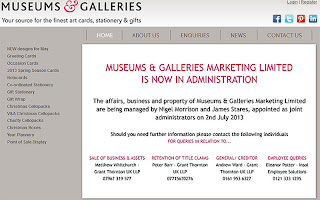 Based in Frome, Museums & Galleries Marketing designed, published and distributed cards, as well as giftware and stationary for various major museums, galleries and high street outlets.

Nigel Morrison of Grant Thornton has been appointed to handle the administration, which was brought about partly by the big hit the firm took following last year's failure of one of its main customers, high street retailer Clintons Cards. A drop in orders from charities has also squeezed profit margins.

Mr Morrison commented: "The company implemented a turnaround plan which involved a series of cost reduction measures but which was also dependent on a recovery in sales. Further funding was provided by the company’s shareholders.

"Unfortunately the market did not operate in the company’s favour and sales did not recover as expected, which was partly due to reductions in order levels from certain charities which were dealing with the effect of reductions in their own income. Sales then declined significantly in May 2013, leading to unsustainable cash flow pressures"

Administrators are reportedly in discussions with a number of parties regarding the sale of the business out of administration.

The firm was founded in 1981 by Caroline Humby Teck in a basement in London. At first the business offered mail order and product development facilities to the cultural sector, with a focus on galleries and museums which were yet to realise the commercial potential in their collections.

Branches were later opened in Paris and New York and Museums & Galleries Marketing counted the Louvre, the Uffizi, London's National Gallery and the National Gallery of Art in Washington among its customers."