Femen is on French stamp

"Femen is on French stamp. Now all homophobes, extremists, fascists will have to lick my ass when they want to send a letter." 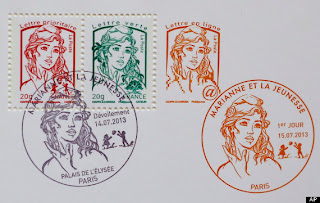 "THE new face of France - or at least the official postage stamp for the President Francois Hollande era - is modelled after a Ukrainian woman who takes her top off to defend feminist causes. 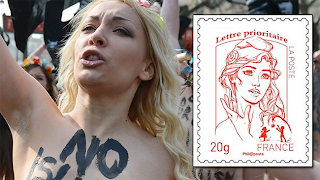 Not everyone thinks that's appropriate, and some are calling for a boycott.

Mr Hollande on Sunday unveiled the new stamp, meant to represent Marianne, a symbol of France since the revolution and French youth. Afterward, artist Olivier Ciappa said the image was modeled largely after Inna Shevchenko, an activist with the group Femen who received political asylum in France.

Mr Hollande's office would not comment on whether the president, a Socialist who has pushed for more women's rights, knew about the Femen inspiration.
An official in Mr Hollande's presidential palace said the image was chosen by a panel of young people from a selection of sketches. The official was not authorised to be publicly named according to presidential policy.

Ciappa described his choice as an homage to the idea of Marianne, who is meant to symbolise liberty and reason and is sometimes depicted topless.
"Marianne, the symbol of France, was a revolutionary woman. When you look at the Delacroix paintings a few centuries ago, she was bare-breasted," he told The Associated Press. "She was fighting for equality, and she was fighting for friendship, which are the values of France. And all of them they are the values of Femen. In a way, Marianne was the first Femen."

Ms Shevchenko herself expressed pride in being "the new icon of the modern interpretation of Marianne."
"I am definitely proud that France is still following the tradition of representing, of showing its national symbol as a woman that is fighting," she told the AP, adding that she was particularly honoured that the woman on the stamp has a garland of flowers in her hair, as Femen activists often wear.

The small, conservative Christian Democrat Party is calling for a boycott of the stamp. On their website and on Twitter, the party said the postal service should withdraw the stamp, saying it "insults the dignity of women, the sovereignty of France."

Femen activists frequently stage protests in France, often with slogans scrawled across their bare breasts.
The group causes controversy, not only by demonstrating topless but also because it is increasingly seen as seeking attention more than fighting for freedoms. Its protests are usually quite small and organised carefully to attract police and journalists.
Femen's demonstrations, which began in Ukraine five years ago focusing on women's rights, have spread across several countries now and its message has become increasingly diffuse.
Its targets have included Russian President Vladimir Putin, the pope, the Islamist government in Tunisia, capitalist bosses at the World Economic Forum in Switzerland, gay marriage critics in France, and abusive husbands in Turkey.
In Ukraine, some have grown disillusioned with the group, particularly after its activists shocked many by cutting down a massive Orthodox cross in Kiev last year to protest the conviction of members of the Russian punk band Pussy Riot."