World War One: How did 12 million letters a week reach soldiers? 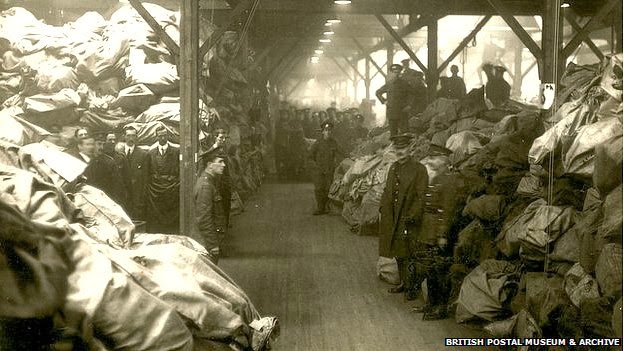 During World War One up to 12 million letters a week were delivered to soldiers, many on the front line. The wartime post was a remarkable operation, writes ex-postman and former Home Secretary Alan Johnson.

When a soldier on the Western Front wrote to a London newspaper in 1915 saying he was lonely and would appreciate receiving some mail the response was immediate.

The newspaper published his name and regiment and within weeks he'd received 3,000 letters, 98 large parcels and three mailbags full of smaller packages.

Had that soldier had the time to respond to every letter he could have done. Wherever he was fighting, his reply would have been delivered back to Britain within a day or two of posting.

How the General Post Office (GPO) maintained such an efficient postal service to soldiers and sailors during World War One is a story of remarkable ingenuity and amazing courage.


The imperative was clear from the start. Ever since the establishment of the Penny Post in 1840, the ability to communicate by letter reliably and cheaply had become a public expectation.
For fighting soldiers it was essential to morale and the British Army knew that. It considered delivering letters to the front as important as delivering rations and ammunition.

The Boer War of 1899 had established an expectation among soldiers that they would be able to stay in touch with those at home but the logistics of doing so in WW1 provided a challenge on an unprecedented scale.

The GPO was already a huge operation before war broke out in 1914. It employed over 250,000 people and had a revenue of £32m, making it the biggest economic enterprise in Britain and the largest single employer of labour in the world, according to the British Postal Museum & Archive (BPMA).

But at its peak during the war it was dealing with an extra 12 million letters and a million parcels being sent to soldiers each week.