"The Valentine’s card which Doris Ward will lovingly place on her mantelpiece on Monday is a little faded and worn around the edges. Which is hardly surprising, since it is making its 70th annual appearance.
As a 17-year-old, Doris was presented with the card by her sweetheart Harry as she boarded a train to volunteer for war training on February 14, 1941.
The couple married the following year, going on to have two daughters, two granddaughters and four great-grandchildren.
And the romance still remains in their marriage – along with what must surely be Britain’s best-used Valentine’s card.
‘Harry has never bought me one since, because I have this one every year,’ said 87-year-old Mrs Ward at the couple’s home in Bristol. ‘I bring it out of the cupboard and put it on our mantelpiece every Valentine’s Day. 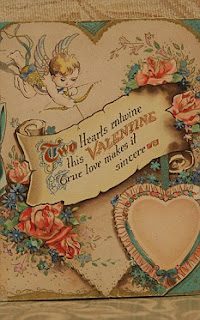 "Two hearts entwine this Valentine. True love makes it sincere"
‘Harry was in the cafe drinking a milkshake and he said hello,’ she said. ‘He asked me my name and we got talking and we really hit it off.
'He offered to walk me to the bus stop but when we got outside a bombing raid had started and there were flares going off everywhere around us, so we had to run to a nearby air-raid shelter.
‘We sat together in there for hours whilst Bristol was being bombed and he even fell asleep on my shoulder.’ Harry was a Royal Marine stationed in Plymouth, while Doris volunteered for the Auxiliary Territorial Service. 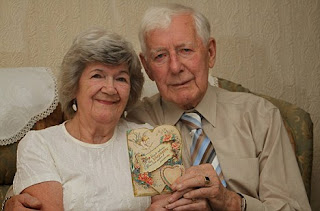 Source: Daily Mail
Posted by Cool Cards at 14:28
Email ThisBlogThis!Share to TwitterShare to FacebookShare to Pinterest