Postie of the Month - ?Year


Talk about going the extra mile..!

A dedicated postmaster embarked on a 300-mile journey to hand-deliver a passport on time.

David Shepherd, 26, of Stratton, Cornwall, drove 50 miles and took four trains after realising he had forgotten to get it in the post.

The passport had to get to customer Hugh Munro in Rye, Sussex, by 09:00 BST the following day so that his planned visit to Amsterdam could go ahead.

Mr Shepherd said his instinct was to "keep the customer happy". 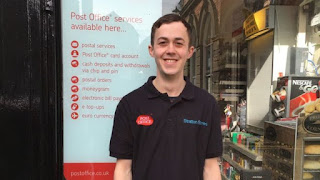 Mr Munro was heading to the Dutch capital for a charity board meeting after stopping off at his sister's house in Rye.

Mr Shepherd, who has been postmaster at Stratton Store for 11 months, said: "I knew it was vital he had it.


"His neighbour brought it in. But it wasn't given to the postman at collection time, so I finished work at 7pm and drove to Exeter to catch the 1am train to London."

Mr Shepherd drove 50 miles to Exeter; caught the train to London Paddington; took the Tube to St Pancras; a further train to Ashford, Kent; and a final train to Rye.

He had just 15 minutes to deliver the passport before catching the train straight back, a journey which cost him more than £150.