Just a quick big up to Cool Cards before we get started...

"A quick word to thanks for your stunningly good service in supplying a card I ordered yesterday afternoon. Within a few minutes I received your acknowledgement, within a few more I received a message to say it had been shipped. (I took the latter with a pinch of salt!) And yet the postman handed me my order this morning at 8.30, well packed in a card-backed envelope. Wow! Even in these days when we all appear to expect everything yesterday (and end up being disappointed), this is very impressive indeed. You must have had someone waiting at the computer, someone else holding open the envelope, and the engine kept running outside, with an escorted drive to the post office! Whatever - I'm delighted, not least by the unusual card, which fits the bill very well. Many thanks, we will certainly add your site to our 'favourites' for future reference. Regards,
Andrew"

Order from Cool Cards before 4.30pm and there's every chance that your UK mainland order will be on your doorstep the following morning. Thanks to the fantastic service of Royal Mail. But it's not rocket science. Or was it?
Get this. Purpose built rocket mail delivery was first sent between two Austrian villages in 1931.
"Friedrich Schmiedl launched the first rocket mail with 102 pieces of mail between Schöckl and St. Radegund, Austria. Schmiedl also launched rockets on 21 April 1931 from the Austrian town of Schöckl to Kaite Rinne with mail and a spectrograph. After the April flight, 79 specially printed postcards marked in German with "Flown in Instrument Rocket" bear stamps from the flights.

Gerhard Zucker experimented in the 1930s with powder rockets similar to fireworks. Between 1931 and 1933, he travelled throughout Germany displaying his rocket and claiming that it could be used to deliver mail.
After moving to the United Kingdom, Zucker attempted to convince the General Post Office that postal delivery by rocket was viable. After initial demonstrations on the Sussex Downs in southern England, rockets were launched on 28 and 31 July 1934 over a 1600-metre flight path between the Hebridean islands of Harris and Scarp in Scotland. Around 1.07 m long with a diameter of 18 cm, the fuselage was packed with 1,200 envelopes. Unfortunately for Zucker both rockets exploded, though most of the smaller second cargo, which included survivors of the first, was saved. 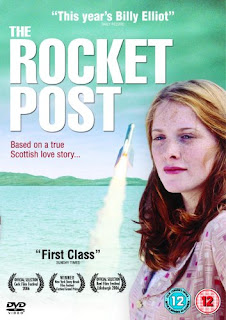 
Stephen Smith, a Secretary of the Indian Airmail Society, combined his work with his interest in rocketry. His first launch was on 30 September 1934, and he experimented with 270 more by 4 December 1944. 80 of these contained mail, and his achievements include the first successful rocket mail sent over a river and the first rocket to carry a parcel. The Oriental Fireworks Company supplied Smith with 16 rockets between 23 March 1935 and 29 June 1935. Between them, these "Silver Jubilee" flights carried over a thousand covers.

In 1992 the Indian government issued a stamp to celebrate the centenary of Smith's birth, calling him "the originator of rocket mail in India".
Then, 28 years after Schmiedl, the Americans got in on the act... and as always have to go that one bit bigger... with a nuclear missile (Hotmail anyone?). 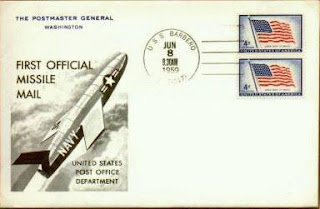 "An American attempt in 1959, was something entirely new, because the mail was not packed in rockets built for the purpose but stowed in mail containers that replaced a nuclear warhead on top of a missile built for war. Because this was strictly an experiment, the mail consisted entirely of commemorative postal covers addressed to a host of government officials, including President Dwight D. Eisenhower.

The missile was fired shortly before noon from a launcher aboard the submarine USS Barbero, cruising off the coast of Virginia. Twenty-two minutes after launch, the missile struck its target at the Naval Auxiliary Air Station in Mayport, Florida.
The mail was retrieved, sorted and routed in the usual way from a post office in nearby Jacksonville." 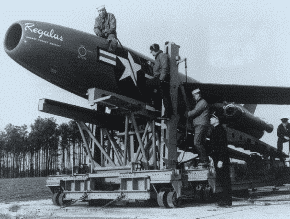