CHRISTMAS cards warning criminals they could end up “doing porridge” instead of eating turkey are being sent out by police in Wales. 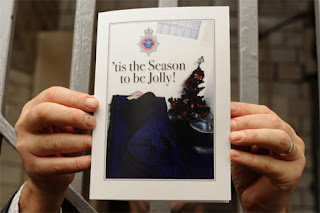 The greetings, personally signed by detectives, will be hand-delivered to the most prolific offenders across Cardiff in the coming days.

Featuring a stark picture of a man lying on a cell bunk next to a stainless steel toilet and a tinsel-covered tree, the greeting inside warns known burglars and thieves they could spend Christmas Day behind bars if they fail to show good will to all men.

Detective Inspector Tudor Thomas said the cards served as a timely reminder and deterrent to those who might be tempted to break the law as the season’s financial pressures build.
“Those who ignore our message could find themselves spending the festive season in one of our cells,” he added.

They are just one of the many measures – including increasing police patrols by putting back-office staff on the beat – which are part of the city’s Christmas crime crackdown, known as Operation Holly.

Detectives across Cardiff will be given cards to send to those who commit the most crimes in their area.
Det Insp Thomas, from Roath and Cathays CID, said: “We have an effective and successful offender management unit, which monitors convicted criminals who are now out of prison.
“Many of these people have stopped committing crime; however, we know that there are extra financial pressures and temptations at this time of year so the cards serve as an additional reminder.”

Police have acknowledged that although the latest Home Office figures show burglaries are down 15.1% compared to the same period last year, break-ins traditionally increase in the run-up to Christmas as criminals know people have presents and other valuables at home.
Det Insp Thomas added: “The cards might seem light-hearted, but the image on the front is the reality and they carry a very serious message.”

Source: Wales Online
Posted by Cool Cards at 17:37
Email ThisBlogThis!Share to TwitterShare to FacebookShare to Pinterest